Most of the students intending to go for UPSC Civil Service Examination ask “What is the salary of an IAS officer?” This is the common question from parents as well as students.

Well, it is not only the salary that an IAS or IPS officer gets. In addition to the salary received in monetary form, there are additional perks and benefits attached to the services. Needless to say, social status and recognition can’t be valued in terms of money.

The IAS Salary structure is divided into eight grades. Each grade has a fixed basic pay and grade pay. This component of the IAS Salary is fixed throughout the grade. The IAS salary comprises of the basic pay, grade pay, Dearness Allowance (DA), House Rent Allowance (HRA), Medical Allowance, Conveyance Allowance.

The DA depends on the city of posting and it differs from city to city. In the same way, HRA is also dependent on the residence of the IAS officer. If he is availing of the housing facility provided by the government then he will be entitled to the HRA. All the allowances differ from officer to officer.

HRA ranges from 8% to 24% of the basic salary. The pay structure as devised by the 7th pay commission does not provide the detail of the salary but provides clear information regarding the maximum and minimum salary of IAS officers within a grade. The payscale is further supported by Grade Pay, DA, HRD, and several other benefits. 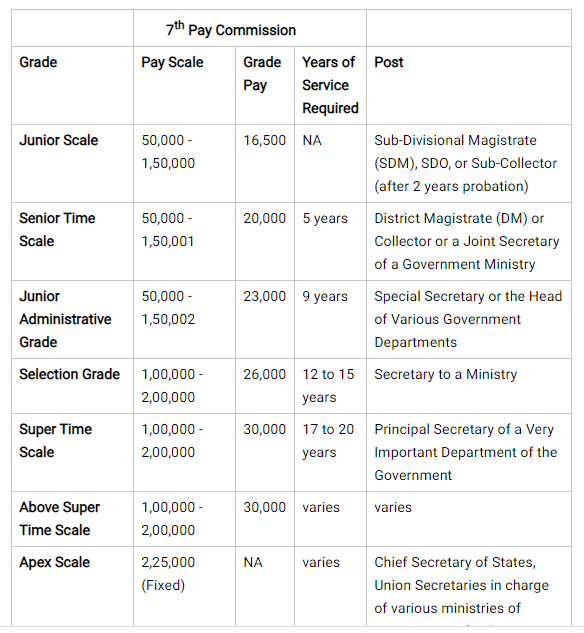 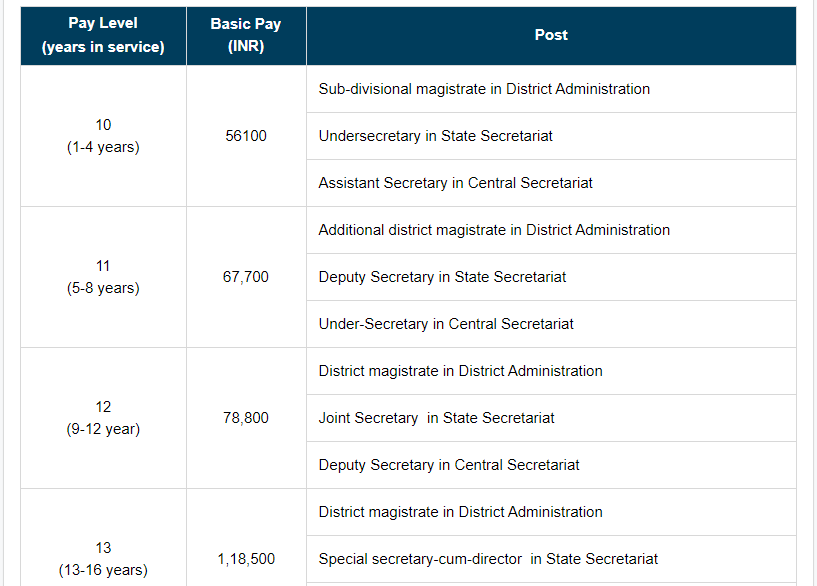 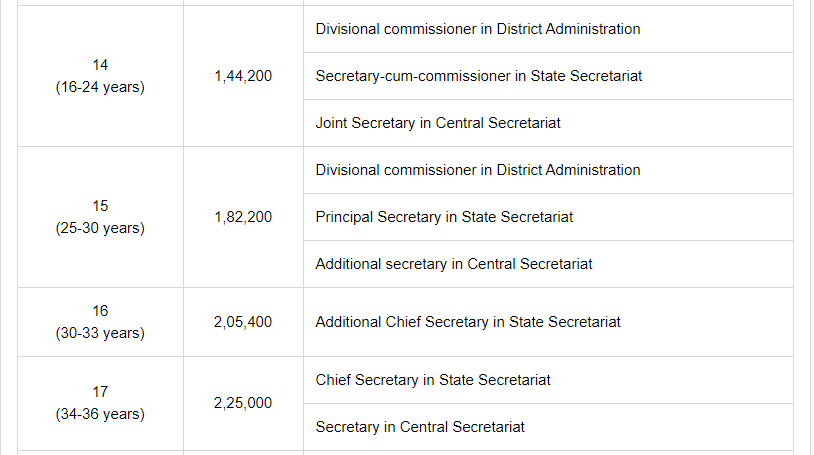 Let us describe each grade.

Junior Scale is the first grade assigned to the IAS probationers. The post included in the junior grade are:

The post differed from state to state and depends on the state nomenclature of the administrative structure.

Senior Time Scale is the second in the line and assigned to the IAS officers who have completed 5 years of service. The posts included in the senior time scale grade are

Junior Administrative Grade is the next in line and as the name suggest, it is assigned to the IAS officers who complete 9 years in the services and becomes a member of the administrative group in the state bureaucracy. Some posts included in this grade are as follows.

Selection grade is assigned to the IAS officers who complete 12 to 15 years in service. This is the most opportune time for the IAS officer. At this stage, he plays a very important role in policy decisions.

This grade is assigned to the IAS officers when they complete 17 to 20 years in the service. The officers don’t follow a regular posting because the postings depend on the will of state governments. Besides, the state cadre strength also plays its role here. The most important posts included in this grade is

The Apex scale is the second top grade in India and only second to the Cabinet Secretary Grade. The officers assigned to this grade only after they achieved success in their previous postings. The posting in this grade depends on the performance and the will of the government. Some posts included in this grade are as follows

This is the apex of the pyramid of IAS salary grades in India. Cabinet Secretary is the top officer of India. The IAS officer for this post is hand-picked by the Prime Minister of India and he can choose from a list of officers provided to him from the Ministry of Personnel.

One of the most important parts in relation to the IAS salary is that the salary is decided and fixed by the Union Government of India, but it is paid from the State funds. The state to which the IAS officer is assigned pays the salary and the other benefits.

What is the salary of an IAS officer?

The salary of an IAS officer varies with his grade. The IAS pay grade is defined by the DoPT. The Junior Grade (at the time of joining) is 50000 -150000. In addition to the basic salary, IAS officer also gets Dearness Allowance (9%), HRA (based on the city of residence) and various other allowances. The salary of an IAS Officer increases with time and grade.

Is the salary of an IAS is more than an IPS?

Yes, the salary of an IAS officer is more than the IPS officer when both have the same service period.

Does the government provides the electricity and other bills of an IAS officer?

In the field posting, if the camp office is attached to the residence of the IAS officer, the electricity bills are deposited by the government. But in all other cases, there is no such provision.

Is the salary of an IAS officer highest in India?

Does the IAS Salary package include mobile and telephone expenses?

In the case of IAS officer, the monthly allowance is fixed for the telephone. Over and above that limit, the IAS officer has to pay the access amount of bill by themselves.

What are the perks of IAS Officer?

There are various perks enjoyed by the IAS officer during the field posting. It includes the vehicle (maximum three), security, free passes to the events occurring in his jurisdiction, even free cricket passes are also provided to the IAS officers.

Does IAS officer get salary during the training period?

Yes, the selected candidates are called Officer Trainee in the LBSNNA. They get an approximate salary of seventy thousand (Basic 56100+DA-9%+ Grade Pay + other allowances). No HRA is given during the training period and where the accommodation is provided by the government.

What is HRA and DA for IAS Officer?

Dearness Allowance is fixed by the Union Government from time to time. The House Rent Allowance (HRA) differs from city to city.

What is the salary of IAS after 7th Pay Commission?

Why the salary of the IAS officers is low?

The salary of the IAS officers is low in comparison to the private sector officials having the same capacity and responsibilities. But when compared to the other government officials, it is good.

What is the salary of an IAS officer per month in India?

The take-home salary of an IAS officer is different depending on the place of posting and the number of service years.