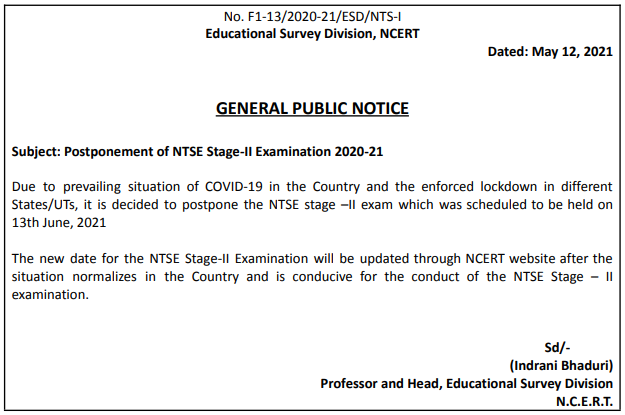 What is ‘National Talent Search Examination’?

The National Talent Search Examination is open for students of Indian nationality whether they study in India or abroad at Class X level. It is a national-level scholarship program in India to identify and recognize students with high intellect and academic talent. It is one of the most prestigious exams in India. 2000 successful students are awarded financial assistance in the form of monthly scholarship; `1,250/- per month every year for class XI and XII and thereafter `2,000/- per month for undergraduates and post-graduates level. There is no prescribed syllabus for the NTSE. However, the standard of items shall be conforming to the level of Classes IX and X. These tests are given to the candidates to judge their power of reasoning, ability to think, ability to judge, evaluate or discriminate, ability to visualize in the space, spatial orientation, etc. Thus preparation for NTSE forms a base for future competitive exams. It is conducted in two stages; Stage-I & Stage-II.

How to Apply for NTSE ?

The National Council of Education Research and Training conducts the National Talent Search Examination every year for class 10th students. Given below is step by step process on how to apply for NTSE.

The students must attach the following documents along with the NTSE application form:

All the documents should be duly signed by the head/principal of the school.

How To Apply For NTSE Stage I

Students must follow the following steps to fill the offline NTSE application form:-

3. Payment of application fee:- The required amount has to be submitted along with the application form. (Only if required)

4. Submission of NTSE application form:- Once all the above steps are completed students must submit the application form either to the respective state liaison officer or to the school.

The application form must be attested by the school principal before the final submission.

Students must follow the following steps to fill the online NTSE application form.

2. Upload all the relevant information:-

3. Upload all the relevant information:-

How To Apply For NTSE Stage II

Ans. The release date of application form and the last date of submission is updated by SCERT on the official website. Even schools provide form filling and submission update.

Q4. How much does NTSE exam cost?

These tests are given to the candidates to judge their power of reasoning, ability to think ability to judge, evaluate or discriminate, ability to visualize in the space, spatial orientation, etc. A variety of questions e.g. analogies, classification, series, pattern perception, hidden figures, coding-decoding, block assembly, problem solving etc. are used for this purpose.

Note: If there is any change in the examination pattern then the same will be communicated through NCERT website www.ncert.nic.in Candidates are advised to keep track of updates on NCERT website.

What is Mental Ability Test (MAT)?

The Mental Ability Test in NTSE syllabus is conducted with main objective to judge and analyse students’ power of discrimination, evaluation, reasoning, the potential to visualize, spatial orientation and space orientation. Topics such as classification, coding-decoding, series, pattern perception, block assembly, hidden figures, analogies and problem solving are asked to the students to gauge their mental ability. The questionnaire includes a set of 100 multiple choice questions. Mental Ability Test is an appropriate way to scale a student’s ability, using rationalized questions. Students need to apply their presence of mind and logical reasoning skills while attempting a mental ability test. Thus, these tests help students develop skills that are required at different stages of life to build up a career.

(i) There is no prescribed syllabus for the NTSE.

(ii) The topics given hereinabove are indicative.

(iii) The standard of questions shall be confirming to the level of Class IX and X.

What is Scholastic Aptitude Test (SAT)?

In the Scholastic Aptitude Test, questions are taken from subjects like Physics, Biology, Chemistry, History, Geography, Economics, and Political Science. The SAT might also include questions like arrange the sequence, match the correct answer, true and false statements, and the comprehension passage-based questions. This might make the exam more entertaining than the multiple choice questions. Scholastic Aptitude Test is an integrated exam and grills the students more than the

Mental Ability Test. As students tend to make more mistakes in SAT, given the nature of the test, it is a good learning experience for the students; it makes them aware of their weak points, as well as their strong topics.

(i) There is no prescribed syllabus for the NTSE.

(ii) The topics given hereinabove are indicative.

(iii) The standard of questions shall be confirming to the level of Class IX and X.

Eligibility and other conditions for continuation of scholarship at higher secondary stage.

iii. Student pursuing diploma or certificate courses will be provided scholarship, at this stage provided if they are not employed.

the scholarship for the second year will be continued on the submission of a certificate to this effect from the Head of the Institution.

From the year 2008, examination, a provision of 3 per cent reservation for Physically Challenged (PC) Students has been made. The interview process for selection of awardees under National Talent Search Scheme is being discontinued from the selection year 2011. The candidates will be selected on the basis of merit in the second level written examination of Scholastic Aptitude Test (SAT) and Mental Ability Test (MAT).

Once again in 2013 NTS Exam was shifted to class X and Language Test (English/Hindi) was included as an additional component along with Mental Ability Test and Scholastic Test. Language Test was qualifying in nature and the scores of language test were not included in deciding final merit. In the year 2014 negative marking was introduced for the first time at the stage II national level examination, wherein 1/3 marks were deducted for every wrong answer and no marks were deducted for un-attempted questions. In the year 2014-15 the rates of scholarships were increased from `500 to the following rates for various stages of education.

In 2015 minimum qualifying marks for SC/ST/PH candidates were increased from 32% to 35%. In 2017 4% reservation to Physically Challenged Category was implemented for group of students, with benchmark disabilities of which, one per cent each shall be reserved for persons with benchmark disabilities under clauses (a), (b) and (c) and one per cent for persons with benchmark disabilities under clauses (d) and (e) namely: a) blindness and low vision; b) deaf and hard of hearing; c) locomotor disability including cerebral palsy, leprosy cured, dwarfism, acid attack victims and muscular dystrophy; d) autism, intellectual disability, specific learning disability and mental illness; e) multiple disabilities from amongst persons under clauses (a) to (d) including deaf- blindness in the posts identified for each disabilities. In the year 2018 negative marking was abolished, there was increase in time duration of test and increase the number of question in MAT and there was change in reporting time for students at the examination hall from 8 am to 9 am on the day of examination. In the same year initiative for downloading E-Admit Cards from NCERT website was implemented.

From the year 2018-19 reservation to Other Backward Class (OBC) is implemented in the NTS scheme. Besides, There is reservations for OBCs @27% from the year 2019 as per central norms subject to the income limit notified by the Government of India from time to time for determination of the creamy layer for the purpose of OBC Reservation vide its letter No. 15 19/2014. Sch-4 dated November 2, 2017.

Why A A Shah’s Young IAS?

A A Shah’s IAS Institute (www.aashah.com) is a premier institute in Mumbai imparting guidance and coaching for top-most competitive exam, namely, UPSC- Civil Services Exam. With our long standing experience in this field, it is observed that the skills/talent required to be successful in the exam to become IAS, IPS, IFS, IRS, are to be nurtured from young age. Thus “A A Shah’s IAS Institute” through its unit “A A Shah’s Young IAS” has formulated well-planned courses for school and college students who aspire to appear for competitive exams at later stage in their lives. “A A Shah’s Young IAS” is equipped with the best faculties, materials, techniques to make you successful in scholarship / competitive exams including NTSE. “A A Shah’s” is known for its sincere and dedicated approach in guiding, training and coaching its students. Having a team of experienced faculties and track record of completion of syllabus with proper revision and tests, A A Shah’s has emerged as a trend setter, starting from UPSC – Civil Services Exams to school level scholarship Exams. After looking into the plight of students aspiring for scholarship exams and their exploitation by so-called big coaching classes, “A A Shah’s” has started coaching for NTSE for students of Std. 9th and Std. 10th, with an aim to provide the best coaching with personal attention and full support till the exam. Comparative table will make it more clear to understand and appreciate A A Shah’s Young IAS Courses:

Young IAS is delighted to bring to you an exciting quiz show, Kaun Banega IAS? Journey from an Aspirant to an Administrator; which will be aired on our YouTube Channel.________________________

Submit your answers to Sample Questions given below pages & Win Prizes:

Q.1. Consider the elements A, B, C and D with atomic numbers 6, 7, 14 and 15 respectively which of the following statements are correct concerning these elements?

III. The element with highest electronegativity is D.

Q.3. Chandimal, Jaysurya and Umesh left their respective villages in Sri Lanka for Chennai in India. Who among the following could be a refugee?

IIII. Umesh whose land and house were destroyed due to Tsunami

Q.4. Which of the following is the inspiring philosophy of the constitution of India?

Q.5. Read the following statements and select one of the four options given below.

Statement I: Enjoyment of pollution- free   water is a fulfilment of rights to life

Statement II: Release from forced labour is a fulfilment of right to life.

(c) All the three bulbs will emit light their rated powers.

Q.7. If the vertices of an equilateral triangle have integral co-ordinates, then

(a)  Such a triangle is not possible.

(b) The area of the triangle is irrational.

(c) The area of the triangle is an integer.

Q.8. Which of the following digits is ruled out in the units place of 120 + 1 for every positive integer?

Q.9. How many points (x,y) with integral co- ordinates are there whose distance from(1,2 ) is two units ?

Q.10. Which of the following regarding the constitution of 1791 and the status of women in France are correct?

Q 1. Direction: In the following question a specific group of numbers is given from the given alternatives, choose the correct alternative that matches the given group?

Q 2. In a Helium gas discharge tube every second 40 x 1018 He (ions) move towards the right through a cross – section of the tube, while n electrons move to the left in the same time if the current in the tube is 8A towards right then n =?

Q 3. Direction: In the following questions choose the correct term that will replace the question mark?

How old was Suresh ten years ago?

Q 5. How many cubes are there having no face painted?

Q 6. Direction: Observe the following pyramid and choose the correct alternative to answer the question

Q 7. Direction: In each of the following questions write which term in the sequence replaces the question mark

How far Ajit is from his original place?

Q 9. Direction: In the following questions a specific group of terms is given from the given alternatives, find out the correct term that matches the given group.

Q 10. Direction: Observe the following venn diagram and choose the correct alternative to answer the question.

How many players play one game?

Learning often happens in classrooms
but it doesn’t have to.