CDS Exam 2019 Notification – UPSC has released the notification for the Combined Defence Services Examination I 2019 (CDS Exam I 2019). UPSC CDS Exam 2019 (I) is held for recruiting candidates for course conducted by Indian Military Academy, Indian Naval Academy, Air Force Academy and Officers training Academy. The CDS exam is conducted twice in a year. The candidates willing to apply for CDS Exam 2019 can apply for the post through the official site of UPSC at www.upsc.gov.in

The “Combined Defence Services”Examination (CDS) is conducted twice a year by the Union Public Service Commission for recruitment into the Indian Military Academy, officers Training Academy, Indian Naval Academy and Indian Air Force Academy. The Notification for the examination is usually released in the months of October and June, and the examinations are conducted in February and November respectively. Only unmarried graduates are eligible to sit for the exam. Successful candidates are admitted into the respective Academies after an interview conducted by the Services Selection Board (SSB).

Candidates successful in the written exam are then called for an interview by a Services Selection Board which evaluates a candidate’s suitability for a career in the Indian Armed Forces. The SSB interview lasts for approximately a week, during which a candidate undergoes various physical and psychological tests to ascertain whether or not he is officer material. Apart from SSB interview, Air Force academy candidates(Only those who have applied for flying branch)are tested for PABT. After these tests, candidates undergone medical examination before finally admitted into the above-mentioned academies, and after successful completion of training, they are inducted into the armed forces.

Eligibility: Candidates are instructed to read “conditions of Eligibility” in the EXAMINATION NOTICE NO.2/2019.CDS-I DATED 31.10.2018

(a) Candidates who are studying in the final year/semester Degree course and have yet to pass the final year degree examination can also apply provided candidate should not have any present backlog upto the last semester / year for which results have been declared upto the time of submission of application and they will be required to submit proof of passing the degree examination at the time of commencement of course.

(c) Candidates, who have yet to pass their degree examination will be eligible only if they are studying in the final year of degree examination. Those candidates who have yet to qualify in the final year Degree Examination and are allowed to appear in the UPSC Examination should note that this is only a special concession given to them. They are required to submit proof of passing the Degree Examination by the prescribed date and no request for extending this date will be entertained on the grounds of late conduct of basic qualifying University Examination, delay in declaration of results or any other ground whatsoever. Candidates who are studying in the final year/semester degree course are required to submit at the time of SSB interview a bonafide certificate issued by University/College stating that they will be able to submit their proof of passing the graduation degree examination by the specified date, failing which their candidature will be cancelled.

What is Exam Pattern?

The CDS Exam comprises:
(a) Written examination as shown in para 2 below.
(b) Interview for intelligence and personality test (vide Part ‘B’ of this Appendix) of such candidates as may be called for interview at one of the Services Selection Centres.

2. For Admission to Officers’ Training Academy :—

Standard and Syllabus of CDS Exam 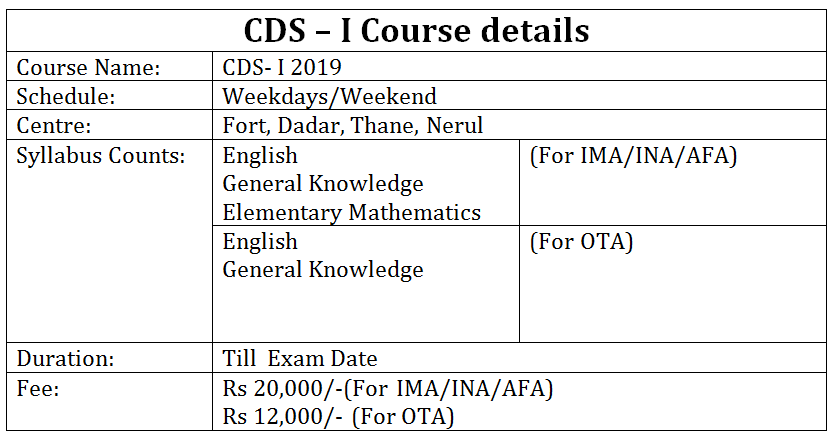